WORLD leading tidal energy experts Nova Innovation are welcoming a new tide of talent to their board.

Nova has made a trio of new appointments including Chris Phillips as Chair, Sir Michael Fallon as Deputy Chair, and Brian Aird as Non Executive Director (Finance).

Technological advances are now enabling tidal energy to scale-up globally – estimated at generating £126 billion by 2050 as part of the marine energy market. The new-look board reflects Nova’s international growth and global ambitions as part of the clean energy transition. 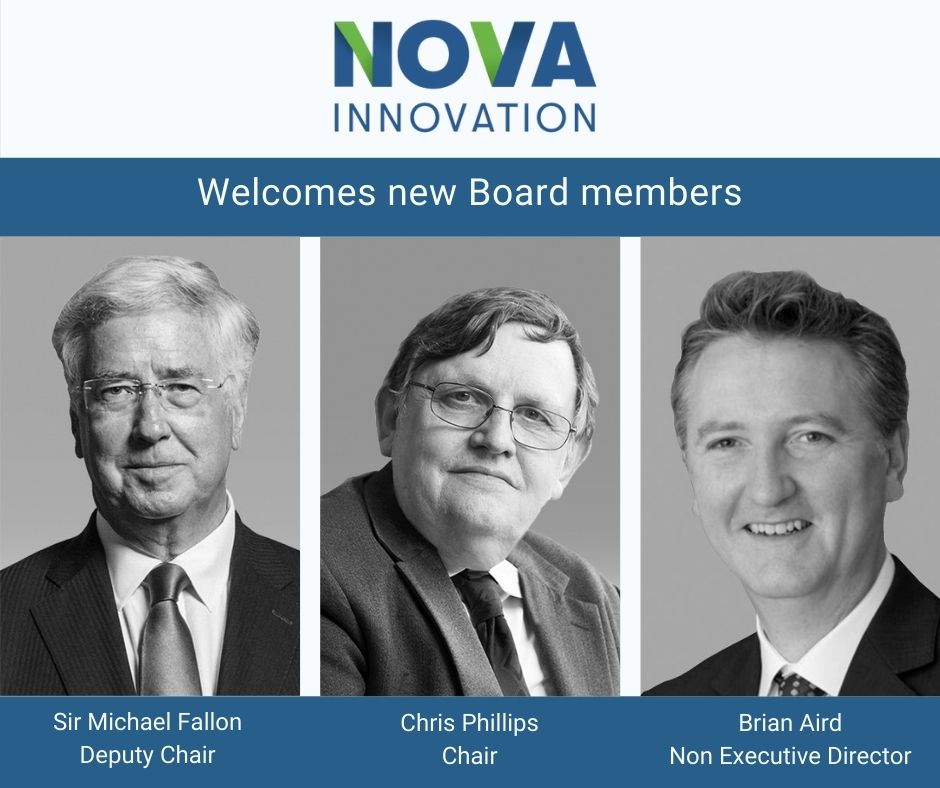 Mr Phillips said: “I am delighted to be joining this exciting growing company, whose values and business will improve the lives of many people around the world as the use of tidal energy expands.”

Sir Michael Fallon is a former Energy Minister for the UK Government and former Secretary of State for Defence.

He said: “I’m excited to be joining as the company explores new markets in Asia and across the world. Tidal power is now a key part of the transition to cleaner energy. Nova has already deployed its cost-effective turbines in the UK and has won major contracts in Canada.”

The new trio on the Nova board is completed by global financial expert Brian Aird, who as CFO, successfully steered Wood Mackenzie from MBO in 2001 to a £1.85 billion sale to NASDAQ listed Verisk in 2015, where he is now Global Treasurer.

Mr Aird said he was delighted to be joining Nova, adding: “I am looking forward to supporting Nova realise its full financial potential. Nova is at a pivotal point having successfully proven the quality of their technology, and this is now about taking the offering to a market which is eager to embrace successful green energy resources. The road ahead is a promising one.”

Nova Innovation is a recognised global leader in tidal energy and built the world’s first offshore tidal array in Shetland in 2016.  It is currently working on projects in Wales, Canada and France, and exploring opportunities in Indonesia and Japan.

He said: “We are delighted to be strengthening the board of Nova Innovation, recognising the considerable breadth of talent that our new members bring. This will be invaluable as we scale up internationally and take tidal energy mainstream.”

He thanked outgoing Chair Ian Marchant for his seven years of service and wished him all the best.

Ian Marchant joined Nova Innovation in 2013 and testified to the rapid progress that has been made in the last seven years.

He said: “When I first joined Nova as non-exec Chair, the company was in its infancy – it employed a handful of people and its first turbine was being assembled in a shed.

“Over the past seven years the company has made enormous progress, including the installation of the world’s first tidal array, combining tidal power with battery storage to produce base load energy, securing investment to advance the technology and now winning multi-million dollar contracts to develop tidal projects around the world.”

“I wish the new board well as they guide Nova as a global leader in tidal technology, and I will remain a shareholder and supporter over the course of that journey.”